Getting some publicity in the media is one of the best ways to reach a large audience for free to let them know how reflexology can help them. Granted these days the reach tends to skew older, so the effectiveness will depend on who you are trying to reach and what media picks up your story.

In helping you get the news story, I might use words that you’re not familiar with in or at least in the context I’m using them. So here’s the list of words you’re likely to see and what I mean when I use them.

Media – technically refers to mass communications which are broadcasting, publishing, and the Internet. When I use the word “media” I’m thinking about television (TV) stations, radio shows (primarily talk or news focused for our purposes), newspapers (daily, weekly, community, etc.), magazines, and even online platforms that are putting out local news, shows, or other programming where you could get some exposure.

“Media” can refer to the companies/organizations as well as the collective people who work for the news outlets.

Personalities – typically refers to talk show hosts or newscasters, but can be used to reference any specific media person.

Publicity or Free Publicity – this is the marketing term for getting visibility or awareness through the media. It’s also called “free publicity” because it doesn’t cost to get the story unlike running an ad which requires buying an ad to get exposure to the media’s audience.

Story or media coverage – Whether you get interviewed for print or broadcast it’s called a “story” or getting “media coverage”. It can also be called an article, feature, interview, segment, etc. Smaller media coverage might just be a “news brief” where you get a short paragraph or two but not a full story in the print media.

Press release or news release – Both terms describe an official statement issued to the members of the news media (aka press). There’s a standard format for them. As for which working to use, years ago I came across the advice to use the term “news release” instead of “press release” the reasoning made sense to me as I want my information to be seen as news not some PR move to get some publicity. So while “press release” is more commonly used, you’ll find I’ll usually say “news release” as it’s an engrained habit and I think that term puts the focus on using it for newsworthy information.

Pitch – this can accompany a news release or stand on its own as the way you approach the media to sell them on the idea you have for a story.

PR (public relations) – is a marketing term that describes the act or person of managing the information communicated to the public. It has relied heavily on doing so through the media and most associate PR with media publicity, though it can have a broader scope.

5 Free Graphics
to Promote Your Reflexology Business
Join now! Email subscribers get instant access to five ready-to-post graphics (and the editable Canva templates) to give your marketing a boost in addition to getting weekly marketing tips help you get more clients.

Best of all, it's tailored specifically to your needs as a reflexologist!
Subscribe!

Check your email for your graphics. 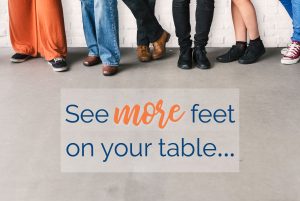 Have you seen the latests posts?